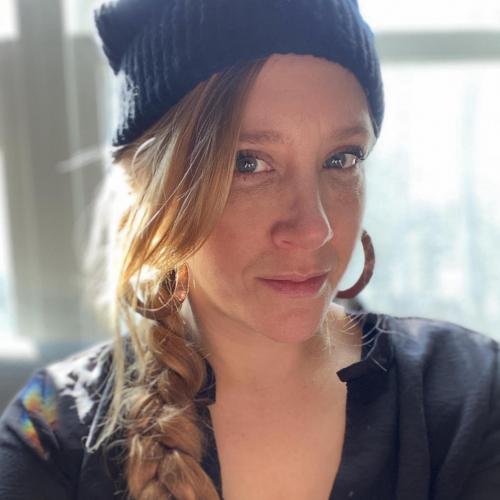 Dh. Singhaśūrī (Lona Kovacs) has been involved in the Triratna Buddhist Order, Aryaloka and Portsmouth Buddhist Center Sangha’s since 2001. She was ordained in 2022 at Akashavana Retreat Center, on a 3-month ordination retreat in the mountains of Spain. She has been a yoga and meditation practitioner for over 30 years and on the teaching team for yoga and meditation retreats at Aryaloka since 2001. She owned and operated a School of Ashtanga Yoga for 6 years in NH. Since the beginning of 2022, Singhaśūrī has worked as the head vegetarian retreat chef, volunteer coordinator and projects coordinator at Aryaloka. Singhaśūrī also works as a fine gardener, forager and medicine maker for her botanical line Witch’s Dream Botanicals, focusing on plant-based education. She has a background in nutrition, Macrobiotics and Herbal Medicine consulting. Her name means “lioness-like heroine”. She lives in Maine with her husband Dh. Śuddhāyu.